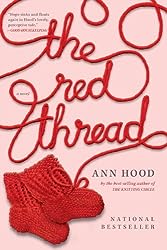 The backstory: I previously enjoyed Ann Hood's novel The Obituary Writer on audio.

The basics: The Red Thread is the story of a Providence, Rhode Island adoption agency specializing in the adoption of Chinese girls. Run by Maya, a divorced woman still dealing with guilt over her own daughter's death, the novel tells the stories of one co-hort of couples adopting Chinese daughters from the beginning of the process through the end.

My thoughts: I feel like my review of The Red Thread is really two reviews: what I thought about it while reading it and what I thought about it after I finished and really thought about it. I tend to enjoy novels told from multiple perspectives, and The Red Thread included many characters, all of whom wanted to adopt for somewhat different reasons. I appreciated the relative diversity of the couples, as it was easy to keep all of the characters straight. While I enjoyed some of their situations and storylines more than others, over all I thought they were well balanced and helped the events of the novel flow quickly and smoothly.

As you know, I'm a new parent. It took us longer than I expected to get pregnant. It wasn't long by many standards (one friend has been trying for ten years. Years.) But it was long enough that our theoretical conversations about what we would do if we didn't get pregnant started to get real. I was able to get pregnant before I had to make a final decision, but I still don't think I would have been willing to try IVF or to adopt. I wish I wanted to adopt, I really do, as the thought of orphanages makes me sad. I'm fortunate enough to have a healthy, happy five-month old, but I'm still fascinated with these issues of fertility and adoption. And in many ways, The Red Thread is an exploration of these issues in an emotionally honest way. After finishing the book, however, I'm not convinced they stand up to much scrutiny. Part of me feels odd criticizing Hood's decisions, as she had a daughter die and went on to adopt a daughter from China, so she should have great insight into the emotional and logistical elements of both storylines. But Hood isn't writing a memoir here, and one of the things I liked most about the book is the variety of characters, both the adopting families and the Chinese women giving up their children for a variety of reasons, including some not of their own choosing. As a series of snapshots of both sides of the Chinese-U.S. adoption experience, The Red Thread succeeds. As a complicated exploration of a complicated issue, it is less successful.

The verdict: While I quibble with many of Hood's choices now that I finished the book and have had time to reflect on it, I did quite enjoy the experience of listening to it. She skillfully weaves many narratives together and deftly explores the process, even if simplified, of adopting a daughter from China. If you're a reader who enjoys an entertaining novel and are interested in adoption, I'd recommend The Red Thread. Even as I enjoyed it while I listened to it, I now find myself wishing Hood had done more with the story and characters.


As an affiliate, I receive a small commission when you make a purchase through any of the above links. Thank you for helping to support my book habits that bring more content to this blog!
4 stars adoption Ann Hood audiobook China contemporary fiction Hillary Huber providence

The backstory:  The Help  was longlisted for the 2010  Orange Prize . It's also now a movie. My thoughts:  Oh,  The Help . I wanted to like you so much.  Bloggers  I  almost always   agree with  all  loved it . As most of the reading public is familiar with The Help  and has probably read it, this review will be frank about the novel and may include spoilers for people who somehow have never heard of it. I fully admit it: I'm not normally a fan of Southern fiction. Despite living in Atlanta for thirteen years, I never developed a love for Southern fiction or culture. Southern food, however, I fully embraced. I picked up  The Help  once before a few years ago and only made it a few pages because of the Southern speak. This time I persevered, but I found it all rather dull. I did really like the character of Skeeter. I'm often drawn to idealistic young female characters who dream of being a writer, so that comes as no surprise. Still, I found nothing in Skeeter
Read more