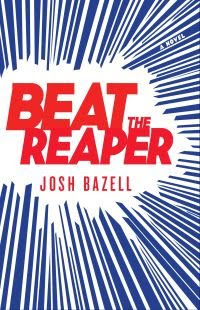 Beat the Reaper is one hell of a gritty, engrossing, hilarious, but at times disturbing, mystery novel. I winced more than once at it's graphic depictions of death and medical procedures, but my heart also warmed to the unlikely hero, Peter Brown.

Peter Brown is a resident at the worst hospital in Manhattan. He's in the witness protection program because he used to be a hit-person in the mob. The story takes off quickly: someone comes into the hospital and recognizes Peter. The patient assumes Peter there to kill him; Peter assumes his cover is blown, and the patient is there as a rouse to kill him. For the rest of the novel, Bazell alternates chapters between the present day drama and the story of how Peter became involved with the mob. Bazell somehow managed to have simultaneous cliffhangers. Throughout the entire book, I was thrilled with the story unfolding in the chapter I was reading and impatiently waiting to return to the other time of the story.

Even though a few scenes turned my stomach, I loved this book. It was original, entertaining, hilarious and absolutely riveting. Nomadreaderboy read it in two sittings. The book has a pretty fantastic Web site too. I'm excited for both the movie version (set to star Leonardo DiCaprio) and Josh Bazell's next book. He must actually enjoy practicing medicine because he's already made enough on this book to be a full-time writer or retire from both professions.