Showing posts from October, 2017
Show all

The backstory: Michael Connelly is my favorite mystery writer. I've read and reviewed all of his books . The basics: The Late Show  is the first in a new series featuring Los Angeles detective Renee Ballard. "They worked the midnight shift, the late show, moving from case to case, called to any scene where a detective was needed to take initial reports or sign off on suicides. But they kept no cases. They wrote up the initial reports and turned the cases over to the appropriate investigative units in the morning." My thoughts: One of the (many, many) things I love about Connelly's novels are that they pass in real time. Harry Bosch, the series of his I love the most, was born in 1950. The first mystery featuring Harry, The Black Echo , came out in 1992. I've wondered how and when Connelly will end that series, and what might come next. The Late Show  attempts to answer that question. As a character, Renee Ballard thinks and acts a lot like Harry Bosch in her
Post a Comment
Read more

On Ruth Ware, book ratings, and enjoying what you're reading

When Ruth Ware's third novel, The Lying Game , came out this summer, I decided to finally read her first novel, In a Dark, Dark Wood , which I've been meaning to read since before it came out. I like to read books, particularly mystery and thriller authors, in the order they were written and published.  I liked In a Dark, Dark Wood  immediately. I realized for a book I'd been meaning to read for so long, I didn't really know much about it. I found the narrator's voice fresh, fun and deliciously dark. It didn't necessarily feel like a thriller, but there was a clear sense that something  was going to happen and make it darker. The novel is at its best when the narrative has two timelines. When the timelines merged, the pace slowed, and I grew impatient. The conclusion, however, reduced what was an enjoyable 3.5 or 4-star read to me to a 2-star read. I found it maddening and not grounded in the reality the rest of the book was. While I rated it only 2 stars
1 comment
Read more

Looking Back on September 2017 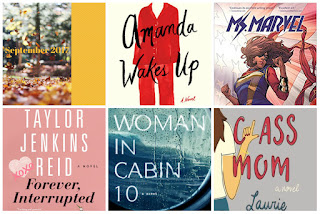 I thought August was a disappointing reading month, but September was much worse. I hope October will get me reading more. Here's what I read in September: Books read: 5 Fiction: 5 Comics: 1 Mystery/Thriller: 1 Audio: 3 New-to-me authors: 2 My Favorite September book: Forever, Interrupted  by Taylor Jenkins Reid Now tell me: what was your favorite book read in September? As an affiliate, I receive a small commission when you make a purchase through any of the above links. Thank you for helping to support my book habits that bring more content to this blog!
1 comment
Read more
More posts