Showing posts from April, 2013
Show all

The basics: As the title indicates, this biography of Sylvia Plath takes a narrow scope: the summer of 1953, when she was a college intern for Mademoiselle magazine and lived in New York City with other interns from around the country. My thoughts: 2013 marks the 50th anniversary of Sylvia Plath's death. Despite her fame and talent, I'm ashamed to say I know more about her infamy and death than her life. Still, there's something that has always fascinated me about Plath, so I welcomed this opportunity to dive deeper into her back story. From the earliest pages of Pain, Parties, Work , however, I realized I was as fascinated by Sylvia's time in the summer of 1953 as I was her colleagues. While Plath drew me to this book, the other women kept me turning the pages. Winder's research for this book is remarkable. The book is laid out much like a magazine. There are frequent text boxes featuring details and quotations. Thankfully, these boxes enhance the narrative rat
4 comments
Read more

The basics: In 1832 in Donegal, Ireland, Coll Coyle wakes with dread. He and his family, including a pregnant wife and young daughter,  are being evicted. An unfortunate series of events put Coyle on the run. My thoughts: The book opens with a sense of dread, and Coll Coyle is never able to really shake it. Lynch's prose is sparsely lyrical, and it sets the tone of the novel by matching the mood of Coyle and thus novel as a whole. I first tried to start reading this novel on the bus, and it didn't work. When I picked it up again at home with a full Saturday in front of me, I started it over and didn't pause until I'd read the last page. There's a quiet haunting to this novel that begs the reader to give the novel your undivided intention. There's a magic in its subtlety that demands a close, careful reading. Although Red Sky in Morning  is somewhat of a thriller, it's not a novel to be raced through to see how it ends. It's a slowly paced thriller,
1 comment
Read more

The basics: When Kate, a successful lawyer, gets a call during an important client meeting that her daughter has been suspended, she's in disbelief. By the time she arrives at the school to pick Amelia up, Amelia is dead, apparently from jumping off the school's roof. As more information emerges, however, it becomes clear all is not as it seems with Amelia. My thoughts: Billing  Reconstructing Amelia  as this year's Gone Girl , a marketing device I typically avoid, doesn't do this novel justice. While it does share some similarities with Gillian Flynn's blockbuster (my review), it reads like an utterly original mash-up of Gone Girl, Where'd You Go, Bernadette?  and Gossip Girl . The novel taps into a sense of "wait, what's real?" and immediately gives the reader the sense she doesn't know exactly what she should believe. In terms of plot, however, I was struck by the similarities to Maria Semple's divine comedy  Where'd You Go, Bernad
8 comments
Read more 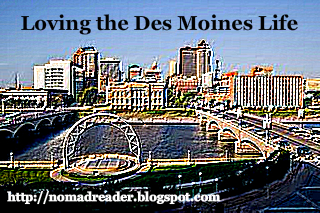 Loving the Des Moines Life is a periodic series highlighting the things, bookish and non-bookish, I most love about living in Des Moines. Last night marked the beginning of Des Moines Public Library's 2013 AViD (Authors Visiting in Des Moines) series . The series is a big deal in the city of Des Moines because we are never a stop on a book tour unless the author lives here or grew up here (hello, Bill Bryson and John Shors!) Many authors stop in Iowa City, which is two hours from and rarely a round trip drive I want to make after work. I did a terrible job of attending AViD events last year, but this year I committed to attend all six to support the literary community in town. It was extra fun to have my friend Jessica, who blogs about fitness at Miss FitGab , join me. First up: Cheryl Strayed! I adored Wild  when I read it last summer ( my review ) and have been meaning to read her novel Torch,  which was written before Wild, and her collection of wisdom Tiny Beautiful Th
1 comment
Read more

Sunday Salon: On taking the nomad out of nomadreader?

Why hello there! Things have been mighty quiet around here lately, and I'm finally ready to tell you why. After moving four times in the six years I've been blogging (yes, I opted not to celebrate my 6th blogoversary this March!), Mr. Nomadreader and I are once again moving. But this time may very well be the last time. Ever. We're under contract on a house and cleared all of those important hurdles of inspection, appraisal and loan application. For the past six weeks I've been afraid to say too much because until we actually close and the keys are in our hands, part of me is still waiting for something to go wrong. It's a sign of our first-time home buyer jitters, but it's also a sign of how much I love this house (and how good of a deal we're getting on it--thank you, buyer's market!) With three weeks to go until closing, I have almost accepted it isn't too good to be true. Now if only fairies would come move and unpack all of our things so I c
12 comments
Read more

The basics: Genevieve dreamed of leaving her high-stress London sales job behind and living on a boat. After taking a second job as a dancer at a private gentleman's club for several months, she saved up the money and is living her dream. On the night of her boat-warming party, however, the first time she attempts to bring together her London friends, from both her pre-club and club days, and her new boat friends, her friend and fellow dancer Caddy washes up dead next to Genevieve's boat. My thoughts: Dark Tide  initially builds tension quite slowly. If you were to open up the book without looking at the cover, you could almost mistake it for a Katie Fforde novel: a young woman starts her life over and looks forward to new adventures. Soon, however, elements of tension and suspension begin to wind through the novel. Genevieve isn't always entirely honest with the reader. As details of her life are slowly revealed, I began to question some of her choices. Most notably, whe
6 comments
Read more 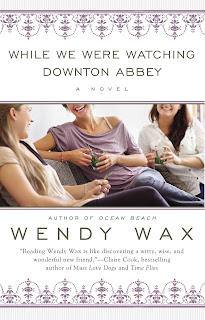 After reading and enjoying Wendy Wax's latest novel When We Were Watching Downton Abbey (my review) , I jumped at the chance to interview her.  Who is your favorite Downton Abbey  character? It has changed over the seasons. Alas, some of my favorites are now no longer breathing, but I have a very soft spot for Mrs. Hughes, who has a great deal of warmth and common sense and survived her cancer scare. Now that Edith is becoming empowered, I am finding myself completely on her ‘team.’ Go, Lady Edith! I adore Edith too. Other than Downton Abbey , what else do you enjoy to watch on television? I’m an occasional Dancing With The Stars viewer, and I really enjoy Smash and Nashville . I also turn to old favorites like House Hunters , Property Brothers , and Income Property on HGTV as well as American Pickers and Pawn Stars on the History Channel – I can, and have, watched Mike and Frank in back to back episodes, but am very glad to see Danielle playing a bigger role! Speaki
2 comments
Read more

book review: While We Were Watching Downton Abbey by Wendy Wax

The backstory: You may noticed I'm quite enamored with Downton Abbey  and have let my love of the show inform several of my reading choices this year. When I heard about Wendy Wax's new novel, about characters who are watching the show themselves, I immediately wanted to read it. The basics: Set in The Alexander, a chic condo building in Atlanta, While We Were Watching Downton Abbey  is the story of its inhabitants who forge unlikely friendships once building concierge Edward, whose ancestor was a British country house butler, begins screening Downton Abbey  on Sunday evenings. My thoughts: Going into While We Were Watching Downton Abbey , I wasn't quite sure what to expect. It was my first experience with Wendy Wax, but she's an author with whom I was already familiar. As both a big fan of Downton Abbey  and the city of Atlanta, where I spent almost half of my life (and met Mr. Nomadreader), I was curious to see how Wax used both the city and the show as backdrops.
5 comments
Read more
More posts