Showing posts from February, 2013
Show all

The backstory: Summerset Abbey  is the first in a new young adult Edwardian trilogy. The basics: When their father dies, Rowena and Victoria Buxton are forced to leave their home and go live with their aunt and uncle. It's a house the girls know well, as they've visited each year. In order to bring Prudence, the daughter of their now deceased governess, whom they think of as a sister, the girls have no choice but to have Prudence come as their lady's maid. My thoughts: Summerset Abbey  ties in so well with the Downton Abbey craze (how long until season four makes its way to the U.S.?) It's story isn't as complex, but it is wonderfully entertaining. I like to think of the Edwardian era as a kind of coming of age for England (and much of the world.) To see these young women entering adulthood at such a time of changing priorities is quite fascinating. By going from a more liberal worldview of their father, who treated Prudence as a daughter and encourage all three
1 comment
Read more

The basics: Set in 1644 York, when the city is under siege, The Midwife's Tale  focuses on midwife Bridget Hodgson. When Bridget's friend Esther Cooper is accused of murdering her husband (an act of treason at the time), Bridget sets out to solve the mystery of who really killed Mr. Cooper. My thoughts: I'm oddly fascinated by the history of medicine. I suppose I'm fascinated by medicine today as well, particularly the tension between tradition and change. I tend to favor all natural, homeopathic methods, but I also recognize the limitations of those methods. I want to believe the earth offers us the tools to heal all of the ailments it creates, but ultimately I think modern inventions and natural traditions are both worthy. All of this excursis is to say: midwifery in the 1600's is bizarre, awesome and utterly fascinating. I was immediately struck by how midwifes must treat unmarried pregnant women: "If she doesn't name the father, the city will have t
7 comments
Read more 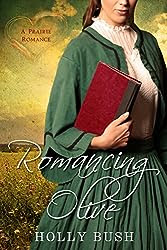 The basics: When Olive receives a letter saying her only brother James and his wife are dead, she sets off from Philadelphia to Spencer, Ohio to gather their two children, Mary and John. She intends to take them back to Philadelphia with her, but there is much about life in Spencer and the life her brother led to surprise Olive. My thoughts: Historical romance is not typically a genre I'm drawn to, but this novel featured so many things I am drawn to that I couldn't resist. Olive is a spinster and a librarian. She's a relatively privileged city woman, yet she must voyage to the Midwest in the 1890's, a fascinating time in U.S. history. Yet as the title suggests, the emphasis of this novel is more on the romance than the history. The story is the relationship between Olive and Jacob, the younger widower who took in Mary and John. While it's rooted in small-town Midwestern life at that time, the story is not firmly rooted in Southern Ohio in the 1890's. Bus
7 comments
Read more

book review: All That I Am by Anna Funder

The backstory: All That I Am  won the 2012 Miles Franklin Award, which is Australia's most prestigious book prize.    The basics: When Hitler takes control of Germany in 1933, not everyone is happy. Two couples, Dora and her playwright husband Ernst Toller, and Ruth and her journalist husband Hans, choose to do all they can to warn their country and the world of the impending war. Funder moves back and forth between Ruth's life in Australia in 2002, Toller writing his autobiography in New York, and the events themselves. My thoughts: I've become somewhat wary of World War II fiction lately, as I've read so much of it. It's become harder for such fiction to impress me, but Anna Funder managed to do so with her debut novel All That I Am . The four characters at the center of this novel are easy to root for: they're on the right side of history. While I adore novels that make me reflect on how easy it is to be on the wrong side of history under my modern gaze
2 comments
Read more

The backstory: Indiscretion  was one of the featured titles at the Harper Collins Book Buzz event at ALA last June. I read it on the plane home from California and was even smart enough to write this review last June while it was fresh. The basics: Indiscretion  is the story of Maddy and Harry Winslow. Harry is a National Book Award-winning author, while Maddy is beautiful, smart and kind. They're a couple revered by all who know them, and the two love to entertain at their home in the Hamptons and at their New York City brownstone. Yet as the title indicates, the marriage may not be quite as strong as it appears. My thoughts: Indiscretion  is an intelligent vacation read. There are elements of an upper-class soap opera, but there are also elements of high-brow literature. The combination works well and keeps the novel from becoming either too serious or too frivolous. This novel also sits somewhere between thriller and domestic fiction. Adding intrigue to the story, the narr
5 comments
Read more

Happy Sunday! I've finally emerged from the haze of January and (almost) feel back to normal. Teaching a three-credit course in three weeks was satisfying, invigorating and exhausting. I loved it, but I'm also glad it's over. I'm already enjoying having more time to read and blog again (there will be reviews posted this week!) I only managed to read six books in January, so I'm hoping February will give me time to catch up and get back on track with my reading priorities this year. I'm pleased to have finished one novel already this month and plan to finish a collection of short stories today. The early months of 2013 are featuring a huge number of new releases I'm looking forward to digging into. If everything goes perfectly (ha!), I hope to read these fifteen (!) books this month: Revenge: Eleven Dark Tales  by Yoko Ogawa (I hope to finish it this afternoon) The Midwife's Tale  by Samuel Thomas The Autobiography of Us  by Aria Beth Sloss All
8 comments
Read more
More posts