Showing posts from September, 2013
Show all

The backstory:  After reading  What Alice Forgot   for my book club this summer (I'll review it eventually, I promise!), I was excited to see the first pick since I joined the She Reads Online Book Club would be Liane Moriarty's latest novel, The Husband's Secret. The basics: The Husband's Secret  focuses on three families in Sydney, who all have a tie to a Catholic school. Tess uproots her son and moves back to Sydney to stay with her mother when her cousin/best friend and her husband reveal that they are in love. Rachel, the school secretary, still mourns the loss of her daughter, who was murdered as teenager. She's further devastated when her son tells her he, his wife and son are moving to New York for two years. Cecelia is the woman who seemingly has it all, including three daughters and a successful Tupperware party business. When she stumbles across a letter in her attic addressed to her with the instructions "to be opened by my wife only in the even
5 comments
Read more

book review: A Question of Honor by Charles Todd 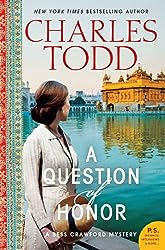 The backstory: A Question of Honor  is the fifth historical mystery in mother and son writing team Charles Todd's Bess Crawford, a British World War I nurse, series. My reviews of the first four: A Duty to the Dead , An Impartial Witness , A Bitter Truth , and An Unmarked Grave . The basics: A Question of Honor  begins in India in 1908, when Bess was living there while her father's regiment was stationed there. The regiment faces a challenge when one of their own killed five people. He's assumed dead, but as the novel shifts back to its present tense in the fall of 1918, Bess begins to seek the truth, about his possible presence in France and about what happened ten years ago. My thoughts: I adore Bess as a character, and it was a delight to spend a little time in her childhood at the beginning of this book. I tend to shy away from mysteries in which the sleuth is not actually in law enforcement or a private investigator, but Charles Todd has done quite well giving Be
1 comment
Read more

Good morning, y'all! Please pardon my unintended absence from blogging. Perhaps next year I'll remember to plan to take the first two weeks of classes off blogging, as I can't seem to find time to sit down and write when the semester first begins. Here's what I've been up to lately: Teaching I'm teaching a new class this semester, a first-year seminar called Real Genius. I always love teaching a course for the first time, but it is so much more work. We're reading Outliers  by Malcolm Gladwell, and I'm really enjoying revisiting it. I opted not to re-read it over the summer (I read it soon after it came out in 2008) and instead read along with my students to keep it fresh. For our next unit, I'm turning control over to the students. They'll each be picking a past winner of the MacArthur "genius grant," selecting texts by and/or about their genius, and leading a class discussion. I'm utterly fascinated by the genius grants and t
8 comments
Read more
More posts