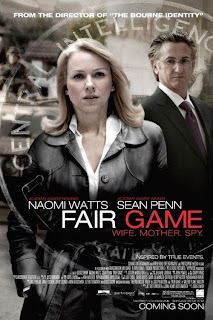 The basics: Fair Game is the story of Valerie Plame, an undercover CIA operative, whose cover was blown by the Bush White House is retaliation for her husband's editorial stating he didn't find uranium.

My thoughts: I was fascinated by this story when it was in the news. I haven't read Valerie Plame's book about the ordeal, but I was eager to see the movie. Although I was quite familiar with the story, the film maintained a wonderful amount of suspense. The story begins by giving the viewer glimpses into Plame's life as a wife, mother and spy. Although their small group of friends had minor roles, I thoroughly enjoyed the scenes of them discussing politics and current events at the dinner table with no idea Valerie was a covert operative who actually knew what was going on.

Despite my prior knowledge of the story, Naomie Watts and Sean Penn shined most as actors in the story of a marriage. The film was based on memoirs by both of them, and one never really knows what another marriage is like, but I was fascinated by their reactions to these very publicized private events. The film is definitely the story of Valerie and Joe, but director Doug Liman did a wonderful job incorporating video of the Bush administration to remind the viewer this far-fetched sounding story actually happened.

The verdict: As both a political thriller and an insightful look at one marriage, Fair Game is riveting. Naomi Watts gives a strong nuanced performance of a dynamic woman, but Sean Penn gave an Oscar-worthy performance as Joe Wilson.


Rating: 5 stars (out of 5 stars)
Length: 108 minutes
Publication date: It's in U.S. theaters now. See a map of where it's playing. You can also pre-order the dvd

from Amazon.
Source: I paid to see it at the Spectrum Theatre.

As an Amazon affiliate, I receive a small commission when you make a purchase through any of the above links. Thank you!
5 stars albany Doug Liman film review Naomi Watts Sean Penn Washington DC