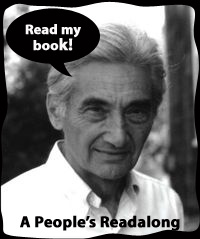 Welcome to Week 7 of A People's Read-a-long! We're reading a chapter a week, and the pace is perfect. (Missed the first six weeks? Check out my posts for weeks one, two, three, four, five, and six.)

My thoughts: Chapter 7, entitled "As Long as Grass Grows or Water Runs," focuses on the removal of Native Americans from land east of the Mississippi River. This chapter was depressing, which is becoming a theme. Again, I felt somewhat familiar with the material. As someone who grew up in Kansas, I was surrounded by geography named for Native Americans and attended schools named Tecumseh and Pawnee. Still, some of the more gruesome details were new to me.

What, or rather who, struck me most during this chapter was Andrew Jackson. Until this point, even as the rich white settlers took over, there have been elements of humanity. I had trouble seeing anything good or human in Jackson.

I also only highlighted three passages in this chapter. One of them was this most depressing story:


"This was appealed to the Supreme Court, and in Worcester v. Georgia, John Marshall, for the majority, declared that the Georgia law on which Worcester was jailed violated the treaty with the Cherokees, which by the Constitution was binding on the states. He ordered Worcester freed. Georgia ignored him, and President Jackson refused to enforce the court order."

I'm still enjoying this book immensely and am glad to have the accountability of reading it each week. I will say, after seven weeks of reading, it is a bit discouraging to only be twenty percent completed. After sneaking a peak at the table of contents again, I'm encouraged to see so many upcoming topics that interest me. I've always been more interested in modern U.S. history, so I hope the sometimes monotonousness of these early chapters recedes as we move forward.

Are you reading along? How are you feeling about the pace and our progress?

Intrigued? Read along! Buy A People's History of the United States from an independent bookstore, the Book Depository or Amazon (the Kindle version is only $2.99 until March 5!) You don't have to post each week. Stop by Fizzy Thoughts and Life...With Books to join the conversation!
As an affiliate, I receive a small commission when you make a purchase through any of the above links. Thank you for helping to support my book habits that bring more content to this blog!
A People's read-a-long Howard Zinn