dinner and a movie: Invictus 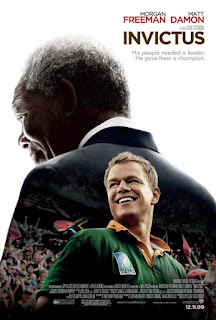 Welcome to my Monday morning recap of my fabulous Friday night movie at the Spectrum Theater and dinner at New World Bistro Bar!

Invictus: I was thrilled Invictus finally came out. I love sports movies, and I am quite a big fan of Matt Damon. Throw in Morgan Freeman, and I was sold. I wanted so badly to like it, but it was only okay.

The movie opens with some sensationally remade news footage of Nelson Mandela (with Morgan Freeman inserted) to provide backstory. Mandela takes over the presidency of a very divided South Africa, and he tries to unite the country around its rugby team. As the story begins, the white fans cheer for the Springboks, while the black fans cheer against them, no matter what team they're playing. Matt Damon plays the rugby team captain, Francois Pienaar.

The good: The acting was good, and at times great. Morgan Freeman completely captured Nelson Mandela's frailty and disposition. Matt Damon was good, although I didn't think he had too much to do. The two stars of this movie for me, however, were two supporting actresses, Leleti Khumalo and Sibongile Nojila. The women both played small roles; Khumalo worked for Mandela and Nojila was the Pienaar's maid. In the hands of other actresses, perhaps I wouldn't even have noticed them, but stealing a movie from Morgan Freeman and Matt Damon is quite a feat, and I hope other take note. On the visual side, Eastwood never disappoints with aerial shots. There were quite a few breathtaking views, but otherwise, the movie was nowhere near his other works, especially the visually stunning Changeling (one of 2008's best movies, in my opinion).

The not so good: This movie falls somewhere between a sports movie and a political movie, and for me, it failed at both. I admit, I know little to nothing about rugby. The climactic sports scene (it's hardly a spoiler, you know there will be one) was dull. I didn't understand how points were scored, how insurmountable leads are, or what the time on the clock was counting up or down to, and thus, I wasn't especially invested in the action. I knew the outcome, but good sports movies excel at providing an amazing, emotional magical journey. This film lacked magic. Not only did I not cry, I didn't even get goosebumps. I should be the target audience for this film; I adore sports movies, and I enjoy political movies. I like the actors in it. It certainly wasn't bad, but it simply didn't grab me. At the end, all I could say was eh. I didn't like it; I didn't dislike it. It wasn't memorable for me, despite being about a fascinating time.

Dinner: As always, I had a fantastic meal at New World Bistro Bar. (Seriously, if you're in Albany, go). To start with, I had the soup of the day: a crab chowder with yucca and red peppers. It was delicious. For my entree, I went with one of my favorite dishes on the menu: steak. This fall I made the switch to only eat local meat, and I'm still amazed how good it always is. I opted for the 8 oz. grass fed sirloin, which is served with a flavorful chimichurri, grilled scallions, fries (accompanied by the only ketchup I like, a homemade banana ketchup that isn't too sweet), and I substitute brussel sprouts fro the broccoli rabe. It was cooked perfectly (rare), and it was fantastic.