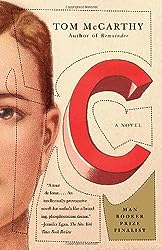 The backstory: C is on this year's Booker Prize shortlist.

The basics: I'm not sure I've ever read a book so difficult to summarize. The book jacket does a decent job, however, so I'll use its description: "C follows the short, intense life of Serge Carrefax, a man who--as his name suggests--surges into the electric modernity of the early twentieth century, transfixed by the technologies that will obliterate him."

My thoughts: C is a complicated, dense, self-referential novel. The overarching theme of the novel (I think) is transmission: the transmission of thoughts, feelings, ideas, words, messages and life itself. It's a difficult novel to evaluate. As I was reading it, I felt simultaneously smart for getting some of McCarthy's puns, symbols and allusions, but I couldn't help feeling I was barely scratching the surface of this novel's depth. By the end, I had a better grasp on the intention of the novel, and I imagine more layers would reveal themselves upon rereading it.

There were times I was enchanted with McCarthy's writing:


Breathing, we live; speaking, we partake of the sublime. In our conversing each one with the other--listening, responding--we form our attachments: friendships, enmities and loves. It is through our participation in the realm of speech that we become moral, learn to respect law, to understand one another's pain, and to expand and fortify our faculties through the great edifices of the arts and sciences: poetry, reason, argument, discourse. (15)

There were times his writing was far too much for me:


He lets a fart slip from his buttocks, and waits for its vapour to reach his nostrils: it, too, carries signals, odour-messages from distant, unseen bowels. (66)

Some characters seemed to stand in for McCarthy's ideas of the novel itself, as when he described "her strange associate web" (70) or Serge's "sense that Sophie's talking about things he's simply not equipped to understand, an apprehension that gulfs as wide as frozen interstellar distances are opening within her words, expanding beyond measure the gap between her and him (74). By the end of the novel, the associative was still strange, but it had somewhat narrowed its scope and tied up its ideas.

The verdict: This book felt longer than it was, even though it was a gripping read. It's incredibly unique, difficult to describe, and its ambitions and conclusions are bigger than its 310 pages. Recommended only for those literary fiction fans who don't mind a challenge.

Publication date: September 7, 2010
Source: I bought it from the Book Depository.

Worth noting: Normally, I only skim the New York Times' book reviews, but C is a rare novel, and I think spoilers may aid understanding rather than spoil the reading experience. Jennifer Egan's review of C is worth reading, before or after you read C.

As an Amazon affiliate, I receive a small commission when you make a purchase through any of the above links. Thank you!
booker prize tom mccarthy