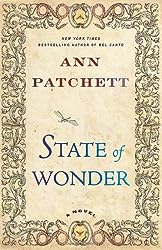 The backstory: I've been eagerly awaiting State of Wonder since I first heard about it, even though I had not read any of Ann Patchett's other novels (I'll be reading her Orange Prize-winning novel Bel Canto

The basics: Scientist Marina Singh faces the heart-wrenching task of relaying the death of Anders, her colleague and friend, to his wife and three sons. When both his widow Karen and the head of the drug company she works for ask her to go to the Amazon to find out more about his death and check the progress of the top-secret drug development Anders went down to check on, she feels she must go, despite her reservations.

My thoughts: About once a year, I encounter a book that works for me on every level. Since I began blogging, there are two books I've rated six stars (out of a possible five): American Wife by Curtis Sittenfeld and Room by Emma Donoghue. State of Wonder is the third. It's a novel I immediately wanted to stick in people's hands and say "read this book." (I did, in fact, immediately place it in Mr. Nomadreader's hands, as I chose it for our first book club read.)

State of Wonder is unlike anything else I've read. To me, a reader of mostly literary fiction (and mysteries), it read like an adventure novel. Readers of actual adventure novels may disagree, but there was intrigue, action and suspense. There were also past secrets, a fascinating anthropological study, a terrifying but exotic location, scientific developments, and current secrets. Most importantly, there was beautifully executed, observant, prose that didn't get in the way of the story. There were times I laughed, cried, cringed and held my breath to see what would happen next.

I loved it while I was reading it, but I was so caught up in the plot and writing, I didn't start to think of it as a novel in its entirety until the end of the book. As I reflected on the journeys of the characters and on my journey as a reader, I was awed. State of Wonder showed the restraint and patience of a seasoned writer who believed in her characters and story enough to tell the story brilliantly.

Favorite passage: "In this life we love who we love. There were some stories in which facts were very nearly irrelevant."

The verdict: State of Wonder is the best book I've read in 2011, which has been an excellent reading year. It's a beautifully written tale of adventure, journey and life itself. Highly recommended to almost everyone. It's the rare literary novel that will appeal to most people.

Convinced? Treat yourself! Buy State of Wonder from Amazon

As an affiliate, I receive a small commission when you make a purchase through any of the above links. Thank you for helping to support my book habits that bring more content to this blog!
6 stars Ann Patchett book review contemporary fiction