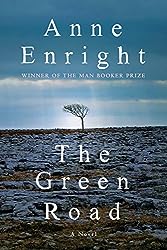 The basics: The Green Road is the story of Rosaleen Madigan and her children. It begins in 1980 with the shock of Dan declaring he's becoming a priest. We spend time with each of the four Madigan children (plus Rosaleen) in different cities (and countries) in a different year before they each come home for a holiday.

My thoughts: In some ways, the first five parts of The Green Road would work as stand-alone short stories. There are some references to the family, but Enright lets us get to know each character individually. Oddly, my least favorite section was Hanna's, which comes first, and Hanna is the character I felt like I knew the least about in the first half of the book. Still, Enright's writing shines:

I won't tell you where each of the Madigan children spend their stand-alone chapters, as seeing where and when they are, as well as what they're doing, is part of the fun. When the novel brings the family back together again, it felt like I was part of the family reuniting. Seeing these characters, all of whom I knew so well, interact together added depth to their individual stories while also advancing the larger story.

As an American reader, I was also struck that Irish readers may interpret this novel differently than I did. It's certainly a global story, but for me, it is the story of one fascinating family. I suspect it might also be powerful cultural commentary on Ireland. I'll be seeking out Irish reviews of this novel to test my theory.

Favorite passage: "Because death is not the worst thing that can happen to you. Everyone dies. It's the timing that matters. The first and second of it. The order in which we go."

The verdict: The Green Road is an accomplished, engaging novel. Enright's writing is luminous--it's filled with wisdom about life and her characters. As I read, it was clear I was reading a masterpiece. I'll be cheering for this book to find a spot on the Booker Prize longlist this year.


As an affiliate, I receive a small commission when you make a purchase through any of the above links. Thank you for helping to support my book habits that bring more content to this blog!
4.5 stars Anne Enright Baileys Prize book review booker prize contemporary fiction Dublin family saga Ireland New York City Toronto