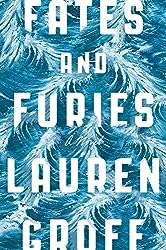 The backstory: Fates and Furies, Lauren Groff's third novel, is on the 2015 National Book Award longlist. I loved her last novel, Arcadia, so very much.

The basics: Fates and Furies is the story of a marriage and two lives. The first half is told from the point of view of the husband, Lotto. The second half is from his wife Mathilde's point of view.

My thoughts: I had high expectations going into Fates and Furies. Arcadia  is both brilliant and moved me emotionally. And the buzz around Fates and Furies is huge. It's the book of fall. Plus, it was longlisted for the National Book Award (hooray!)

This novel is a book in two parts. Because Groff chooses to split it into halves (Lotto's is a bit longer) rather than interweave the chapters, there's a fair amount of setting the stage the first half of the novel takes on. It builds up this fateful, epic love story, and in some ways, the second half tears it down. In that sense, the first half was slightly more laborious. Groff's writing is beautiful, and these characters are fascinating, but I did find myself eager to get inside Mathilde's head. It's hard to know if I would have felt the same way if i went into this novel not knowing it's told in two pieces. Because I knew Mathilde's voice was coming, I was eager to get there. Still, I found myself savoring Lotto's section because of passages like this one:


"He had loved her with all his might these two weeks and, in so loving, had considered her transparent, a plate of glass. He could see through to the goodness at her quick. But glass is fragile, he would have to be careful. "You're right," he said: thinking, No, thinking how deeply they belonged. How surely. Between his skin and hers, there was the smallest of spaces, barely enough for air, for this slick of sweat now chilling, Even still, a third person, their marriage, had slid in."

And I correctly intuited many of these early details would matter later.

Once I started Mathilde's section, I stopped savoring and starting devouring this novel. I correctly guessed a few of the surprises, at least partially because I knew to expect some, and partially because Groff gives the reader clues that present two likely explanations. Discovering which explanation is true was a delight. Groff also drops a few unexpected bombs that made me feel like I was reading a crescendo in a mystery novel.

Yet while this novel is very much the story of Lotto and Mathilde (and their marriage), it is so much more. Groff deftly infuses wisdom into minor characters and passages:


"She was still a teenager in the soap opera. She'd be a teenager until they killed her off and then she'd play mothers and wives. Women in narratives were always defined by their relations."

This passage spoke to me as I read it, and as I read it again while writing this review, I see it in a different late after Mathilde's story.

Favorite passages: "Please. Marriage is made of lies. Kind ones, mostly. Omissions. If you give voice to the things you think every day about your spouse, you'd crush them to paste. She never lied. Just never said."

"Even then, she knew that there is no such thing as sure. There is no absolute anything. The gods love to fuck with us."

"Most operas, it is true, are about marriage. Few marriages could be called operatic."

The verdict: Through these two characters, Groff offers a fascinating glimpse into marriage. Mathilde's story is one for the age, even as I acknowledge there are allusions to Greek mythology in this novel I did fully appreciate. Groff shows masterful control of voice, character, and storytelling in Fates and Furies. As I reread passages I highlighted for this review, I found myself seeing them differently, which made me want to read this novel again immediately to find even more layers and connections. And with Fates and Furies, Lauren Groff enters a very special place: I've rated more than one of her novels 5 stars. Welcome to the club, Lauren.


As an affiliate, I receive a small commission when you make a purchase through any of the above links. Thank you for helping to support my book habits that bring more content to this blog!
5 stars contemporary fiction Lauren Groff marriage