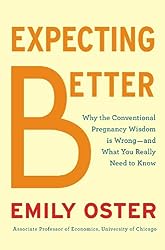 The basics: The subtitle of Expecting Better really says it all: why the conventional pregnancy wisdom is wrong--and what you really need to know. Emily Oster is a health economist, and in this book she offers up her analysis of what the data behind the pregnancy rules (the good, bad and unnecessary). While she offers her decisions, she also leaves room for the reader to make her own informed decisions about her pregnancy.

My thoughts: Expecting Better made headlines when it came out last August. I vividly recall the NPR headline "Pregnant? It's okay to have a glass of wine*" with the asterisk indicating "according to an economist." Which is true, but also according to doctors across Western Europe and Australia, but I'm getting ahead of myself. In August, we were still in that very frustrating stage of trying to get pregnant, so I purchased the book for my Kindle and impatiently waited until I was actually pregnant, which blessedly finally happened in December 2013, to start reading. Then I discovered the first section is about getting pregnant. Live and learn.

I'm not a fan of arbitrary rules, and being pregnant is no exception. Some are obvious, of course, but before I blindly follow rules, I want to understand the why, and that's what Oster does in Expecting Better. When I talk about being pregnant with women 20-30 years older than I am, they are quick to tell you all the things they were allowed to do that are forbidden now (soft cheese, steak cooked less than well-done, cold cuts, etc.) And as they're always quick to point out, my kids turned out okay. Admittedly, as much as I wanted a baby, I was never looking forward to actually being pregnant. I'm a sushi-eating, rare-steak loving, blue cheese devouring, wine-drinking fool. Nine months without them? It sounded unpleasant. I won't go as far to say I'm happy to do it, but if it's really putting my baby in danger, of course I will avoid things. If, however, there isn't a good answer to the "why?" question, then why make myself even more miserable if it's not helping my baby?

I'll let the data in Expecting Better speak for itself. I didn't make all the same choices as Oster did, but that's the beauty of this book: it's not about the advice; it's about the data. It's about equipping yourself with the right information so you (and your partner) can make informed decisions about your pregnancy. Oster distills it for you, but she also features extensive citations so you can read the actual data for yourself when you're so inclined.

As hard as it is, I avoid red meat that isn't well done (and that one is getting harder as grilling out season gears up.) I avoid unpasteurized cheeses (I did thankfully find a great pasteurized Stilton to satisfy my blue cheese craving.) I eat sushi. I eat runny eggs. I drink a glass of wine most nights (only twice a week in the first trimester.) I even have one glass with lunch and one with dinner on occasion. I cut back on caffeine in the first trimester, but I never cut it out. We opted not to do first trimester prenatal screening, which surprised me. I'm opting for an epidural.

The verdict: Expecting Better is a must-read for pregnant women, women trying to get pregnant, and anyone interested in the science of pregnancy. As an economist, Oster brings a Freakonomics-style approach to analyzing pregnancy data. She also brings her personal experience of being pregnant (plus many stories from her sister and friends, who often received different information from their different doctors.) I read it in a single day (the day I found out I was pregnant), but I've continued to refer to it throughout my pregnancy, particularly when people try to tell me not to eat cold cuts or enjoy my pregnancy-portion of wine. It's a book I'll keep giving to my pregnant friends for years to come.

Convinced? Treat yourself! Buy Expecting Better: Why the Conventional Pregnancy Wisdom is Wrong--and What You Really Need to Know from an independent bookstore, the Book Depository or Amazon (Kindle edition.)


As an affiliate, I receive a small commission when you make a purchase through any of the above links. Thank you for helping to support my book habits that bring more content to this blog!
5 stars book review childbirth Emily Oster nonfiction pregnancy