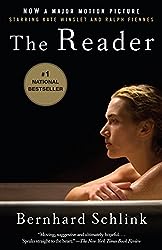 The backstory: The Reader is one of the 1001 Books to Read Before You Die.

The basics: Narrated by Michael, whom we meet as a fifteen-year-old, The Reader is the story of his life and the relationship he develops with Hanna, a 36-year-old train director he meets at the beginning of the novel, as well as the reverberating impacts of that relationship on his life.

My thoughts: I've known about The Reader since its release in the United States almost twenty years ago, yet I never realized it was about the love affair of a teenage boy and an adult woman. It's about much more than that too, but the first part of the book surprised me. As I kept reading, I marveled at how many storyline Schlink weaves into this slim novel. I was particularly entertained with Michael. Campbell Scott's narration often had an urgency to it. He read the novel as though Michael was seeking to explain, or perhaps seeking some level of internal redemption.

I've read a lot of literature about World War II and its aftermath, but it was fascinating to read a German author write German characters dealing with these issues. Schlink writes with rich, honest insights about the realities and difficulties of coming to terms with the actions of Germany in World War II.

Favorite passage:  "I don’t mean to say that thinking and reaching decisions have no influence on behavior, but behavior does not merely enact whatever has already been thought through and decided. It has its own sources, and is my behavior quite independently just as my thoughts are my thoughts and my decisions my decisions."

The verdict: Even as I guessed many of the film's revelations, I quite enjoyed the thoughtfulness of Schlink's writing and ideas. The Reader covers a lot of ground, in both story and theme, and it's subtleties still have me pondering it. I'm eager to watch the film adaptation soon and see how it compares.

Convinced? Treat yourself! Buy The Reader from Amazon (Kindle edition.)


As an affiliate, I receive a small commission when you make a purchase through any of the above links. Thank you for helping to support my book habits that bring more content to this blog!
4 stars Bernhard Schlink book review Campbell Scott Carol Brown Janeway German Germany translated fiction