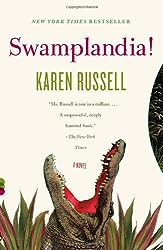 My thoughts: Although I had high expectations for this novel, I had no specific expectations. I knew very little about it, and I had the pleasure of being transported into this quirkily delightful family immediately. The book is narrated by Ava, a thirteen-year-old girl who knows little of the world beyond her home. Despite Russell using a vocabulary beyond Ava's means, her voice is authentic, and I was drawn to her.

The first surprise in this novel was how funny it is: "We leased an expensive billboard on the interstate, just south of Cape Coral: COME SEE "SETH," FANGSOME SEA SERPENT AND ANCIENT LIZARD OF DEATH!!! We called all our alligators Seth. ("Tradition is as important, kids," Chief Bigtree liked to say, "as promotional materials are expensive.") Russell has been compared to Carl Hiaasen because she writes about Florida and is funny, but her humor is different than Hiaasen's is. To me, Karen Russell is a combination of Alice Hoffman, Audrey Niffenegger, Carl Hiaasen and Janet Fitch. She's Gothic, funny, flirts with magical realism, but is first and foremost a storyteller with a talent for descriptive language: "Ossie was like an aquarium with other people's secrets."

Initially, I was completely enamored with Swamplandia! and its characters. At some point, however, the narrative became quite stagnant for me. It lost its momentum and began to feel uneven. Kiwi and Ava's journeys alternated chapters, which was disorienting at times, even though I was enjoying both of their stories. When I read in Emma Donoghue's review of Swamplandia! from The New York Times, which is full of spoilers--so be warned, that is was based on a short story from the St. Lucy's Home for Girls Raised by Wolves

collection, it made more sense. While Swamplandia! is bigger than a short story, it's not quite as big as it thinks it is. I wish the narrative were a little cleaner in the middle and packed more punch at the end.

Favorite passage: "Kiwi had never once seen a pornographic film. Henry Miller's books had aroused him but confused him."

The verdict: Despite being uneven at times, I thoroughly enjoyed Swamplandia! overall and will eagerly read Karen Russell's future novels. She's a talented writer with immense promise, and I hope her narrative structure rises to the level of her writing and characters in her next novel.

so I could wake up at 6 a.m. on its release day and start reading.

As an Amazon affiliate, I receive a small commission when you make a purchase through any of the above links. Thank you!
20 under 40 4 stars book review Carnegie Medal Florida karen russell new york state writers institute orange prize pulitzer 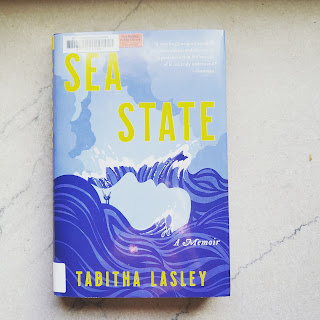