thoughts on Committed by Elizabeth Gilbert

I spent a year reading Committed, Elizabeth Gilbert's memoir/treatise on marriage. I started the book the week of my wedding, which was one year ago today. As I've spent more time this past year pondering marriage than I ever have before, I relished dipping into Gilbert's words on the subject.

I still hold Eat, Pray, Love as one of my all-time favorite books. If you didn't like it, then you probably won't like Committed either. They're incredibly different memoirs, but both are incredibly reflective, honest and personal; it's a style you either love or hate. I love her turn of phrase: "the happier twin sister of loneliness: privacy."

Mr. Nomadreader and I have been together for five years now, and I love him fiercely. Sometimes I'm still surprised we got married. We committed to living our lives together years before we got married (or engaged) and adopted the general attitude that when it became important for one or both of us to get married, we would, but until we felt the need to, we were fine just being international love partners (a phrase we coined because partner seemed too generic, life partner too severe and we wanted something to convey our commitment both to each other and to a life of travel and fun.) All of this leads into the main point: if you are a person who always dreamed of a wedding or even one whose relationship (or ideal relationship) entails a linear path of dating, engagement, wedding, then this book might not mean much to you. If, however, you are like me and were not quite sure if marriage suited you, or simply don't find it a necessary step in a romantic relationship, then you might just love Committed as much as I did.

The premise of the book is simple: both Gilbert and her boyfriend (a term she finds silly at her age) are divorced. Neither wants to get married again. He is not a U.S. citizen, and returning from a trip abroad, he is detained by customs. They're faced with getting married or him never coming back to the U.S. Gilbert wrestles with her aversion to getting married while never doubting her love.

"Marriage in the Western world changes with every century, adjusting itself constantly around new social standards and new notions of fairness. The Silly Putty-like malleability of the institution, in fact, is the only reason we still have the thing at all."

"It took me over three and a half decades to get to this point--to learn the limitations of sane human intimacy, as nicely defined by C.S. Lewis, when he wrote of his wife, 'We both knew this: I had my miseries, not hers' she had hers, not mine.'"

"Forgiveness may be the only realistic antidote we are offered in love, to combat the inescapable disappointments of intimacy."

"'MARRIAGE IS NOT PRAYER!' he insisted (italics and capitals his.) 'That's why you have to do it in front of others, even in front of your aunt who smells like cat litter. It's a paradox, but marriage actually reconciles a lot of paradoxes: freedom with commitment, strength with subordination, wisdom with utter nincompoopery, etc. And you're missing the main point--it's not just to 'satisfy' other people. Rather, you have to hold your wedding guests to their end of the deal. They have to help you with your marriage; they have to support you or Felipe, if one of you falters."

now)
Source: I bought it for my Kindle 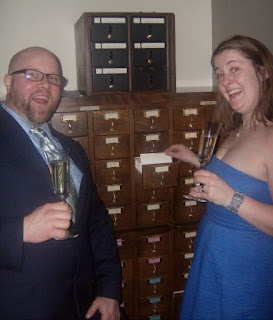 Here I am with my wonderful husband, who is still my international love partner first and foremost, at our wedding. We got married at the Country Music Hall of Fame Library in downtown Nashville, and our card catalog pose (with sparkling wine, of course) remains my favorite photo of our wedding. My thoughts on marriage are still incredibly complicated, and I'm as drawn to tales of marriage now as I was a year ago. It's a powerful theme I seek out in fiction, memoir and film, and I plan to write about it semi-regularly here in the coming years. Happy anniversary to Mr. Nomadreader, my most doting reader, who takes the time to talk to me about each and every blog post I write. This one is for you, who may not have said it the way Felipe did, but sure has let me live like it: "a woman's place is in the kitchen...sitting in a comfortable chair, with her feet up, drinking a glass of wine and watching her husband cook dinner."

As an Amazon affiliate, I receive a small commission when you make a purchase through any of the above links. Thank you!
4.5 stars book review Elizabeth Gilbert marriage nonfiction